Autumn gusts;
Leaves blow along with me
As I walk.

It is a very windy morning here on the day before Halloween.

As you know, Halloween is the ending of autumn and the beginning of winter in the Hokku Calendar.  It is one of the cross-quarter days, which means it falls halfway between an equinox and a solstice, in this case between the Autumn Equinox and the Winter Solstice.

Halloween marks the beginning of the long darkness of winter nights, when the days are at their shortest.  So in the hokku calendar,  it is the entry to the most Yin time of the year — Yin being associated with cold and darkness and the withdrawing of the energies of Nature.

The full moon after Halloween — the Frost/Frosty Moon or Beaver Moon — will be on November 4th this year. 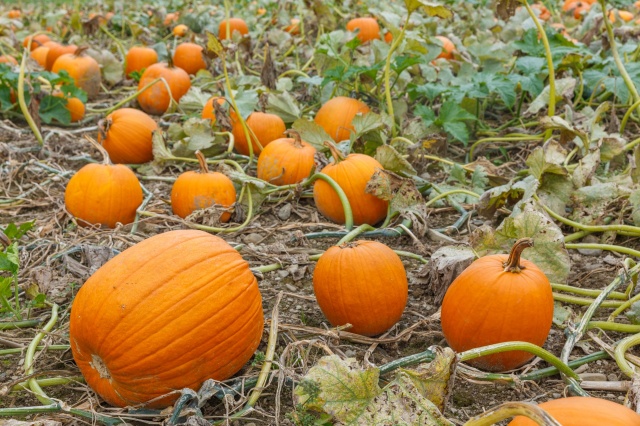 This is from my morning walk:

Perhaps you noticed (it would be good if you did) that this — in its pattern — is much like that of the old hokku by Suiō:

The autumn night;
Dreams and snores
And crickets chirping.

The original of Suiō’s verse just said “crickets,” but in his translation, R. H. Blyth added the implied “chirping,” which indeed is better in English.

The various patterns possible in hokku make handy containers into which any appropriate content may be poured to make new hokku.  That is why I emphasize the importance of patterns — the study of how old hokku are assembled —  to those learning hokku.

In 1907 an English-language article about the hokku appeared in — of all places — The Reformed Church Review, published in Philadelphia, Pennsylvania.  It was written by a Japanese — Professor J. K. Maeda — apparently a teacher at the Protestant North Japan College (Tohoku Gakuin) in Sendai at that time.  It shows us that the name hokku was then still in general use, before it was overtaken — as the years passed — by Shiki’s promotion of the eventually confusing term “haiku.”

It also reveals a major factor in why Westerners had difficulty appreciating the hokku for what it was.  There was a strong tendency — still prevalent in the later writing of Harold Henderson — to present the hokku to Westerners in (often abysmal) rhymed form, no doubt to make it recognizable to them as a kind of poetry (as poetry was still then generally understood), which did it great damage.  The “translated” examples in the article often distort verses nearly beyond recognition.  We also see the use here of the “5-7-5 syllables” description, which did not help the future of hokku, because Japanese phonetic units are not precise equivalents of English syllables.

Nonetheless, the article is revelatory about the state of the hokku at that time.  The magazine Hototogisu is mentioned, which of course was Shiki’s primary platform for his supposed “reform” of the hokku.  By the time of the article, its editorship was under Shiki’s follower Takahama Kyoshi.

It is noteworthy that the author ends by saying:

“There are many masters among the educated class of people, and they are making efforts to save the Hokku from becoming dry and prosy.  Something is being done in the way of improving this kind of composition; but there is reason to doubt whether it has much of a future.”  Professor Maeda is somewhat deprecating of the hokku, which reflects a tendency in late 19th-early 20th century Japanese culture — overwhelmed at that time by influences from Western art, literature, and technology — to see itself as not measuring up to that of the West.

In any case, here is the article in full from the Reformed Church Review of 1907: 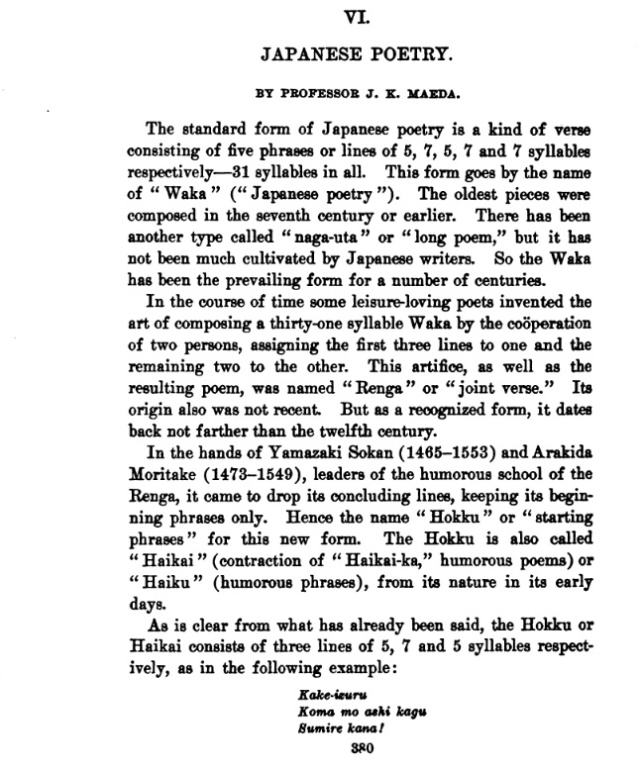 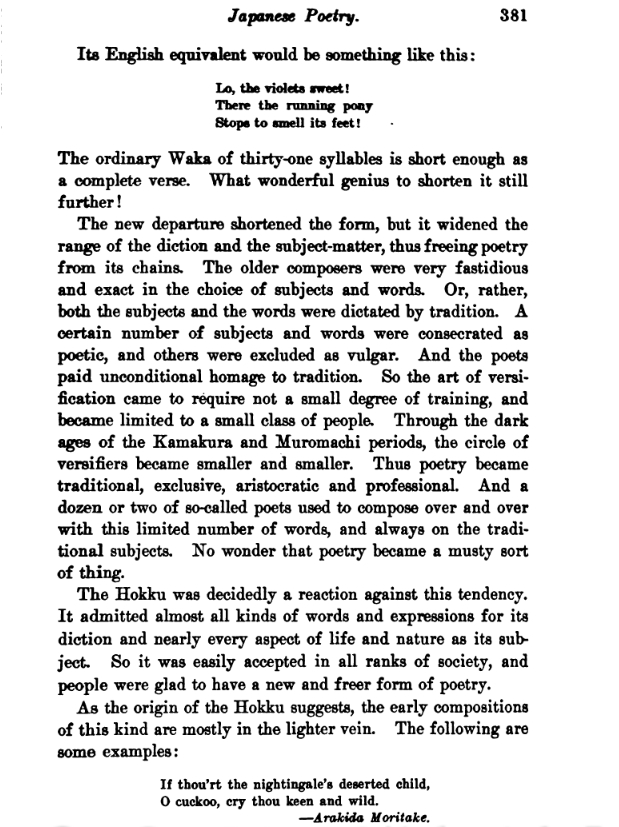 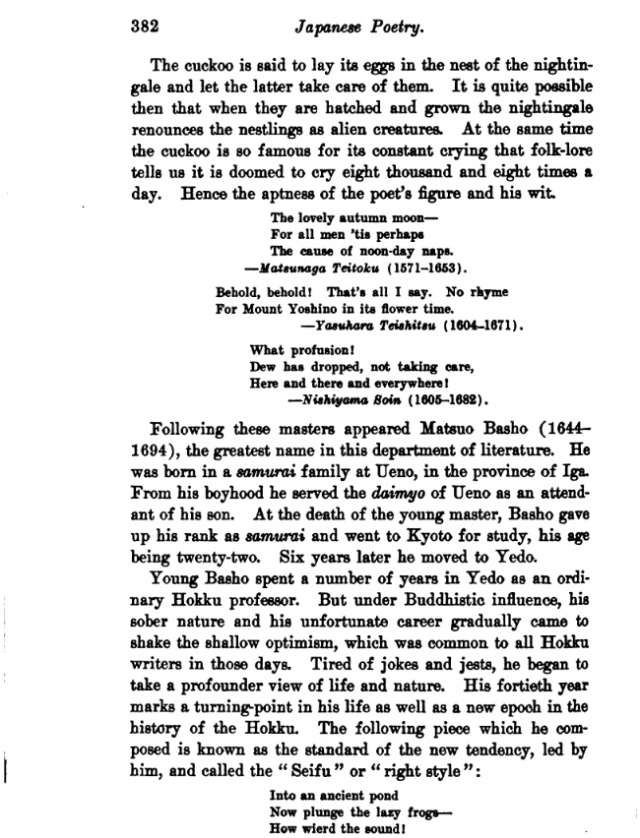 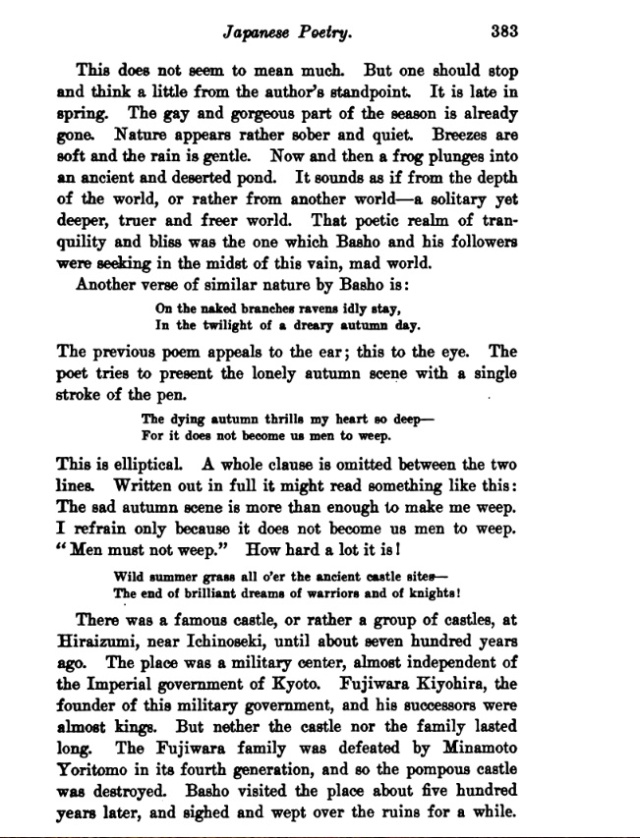 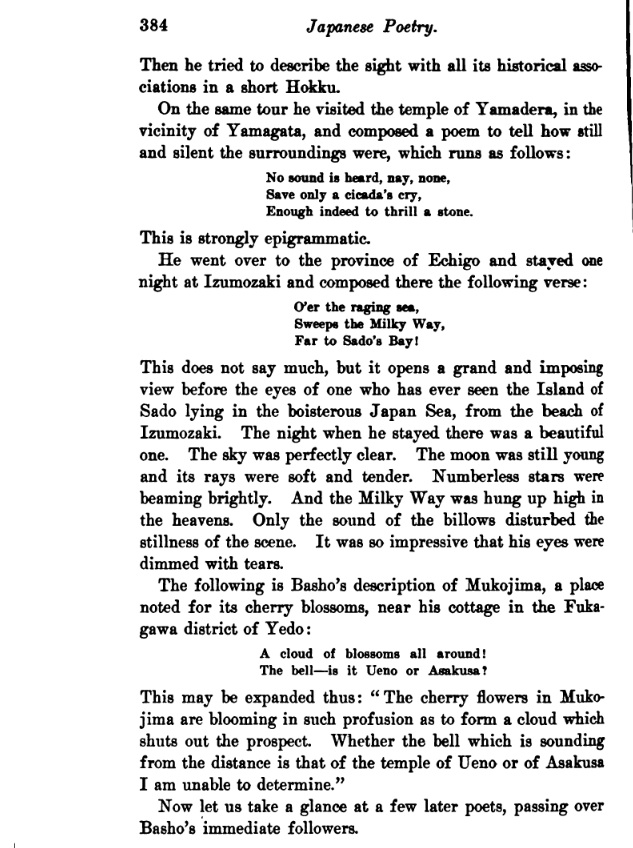 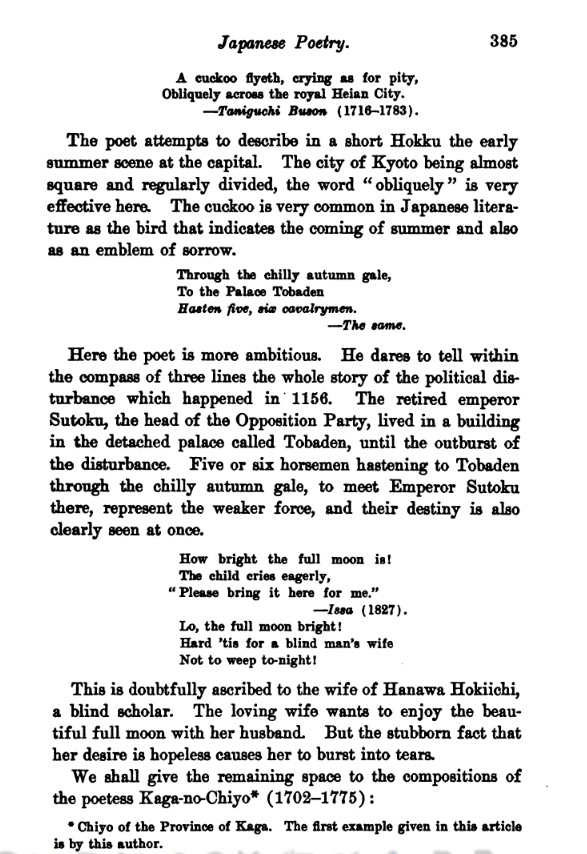 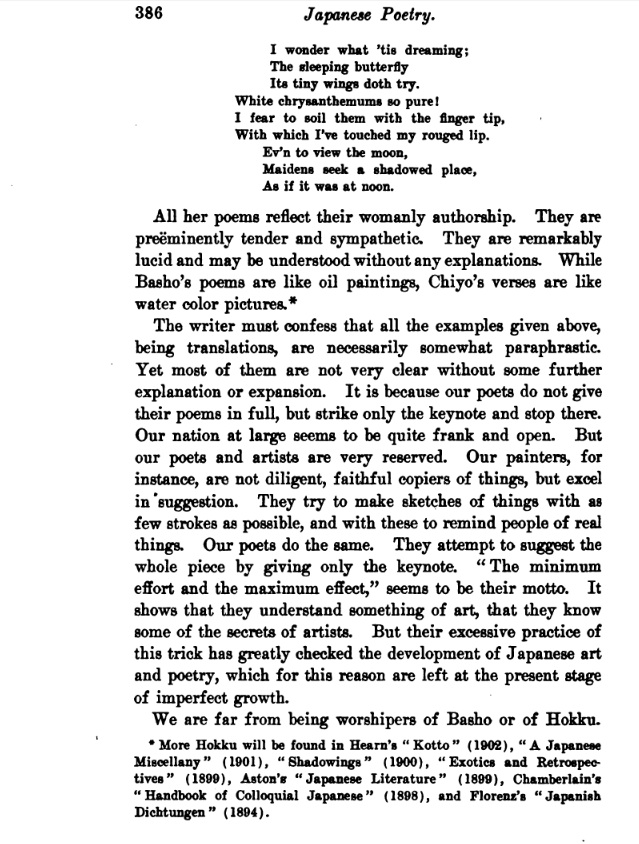 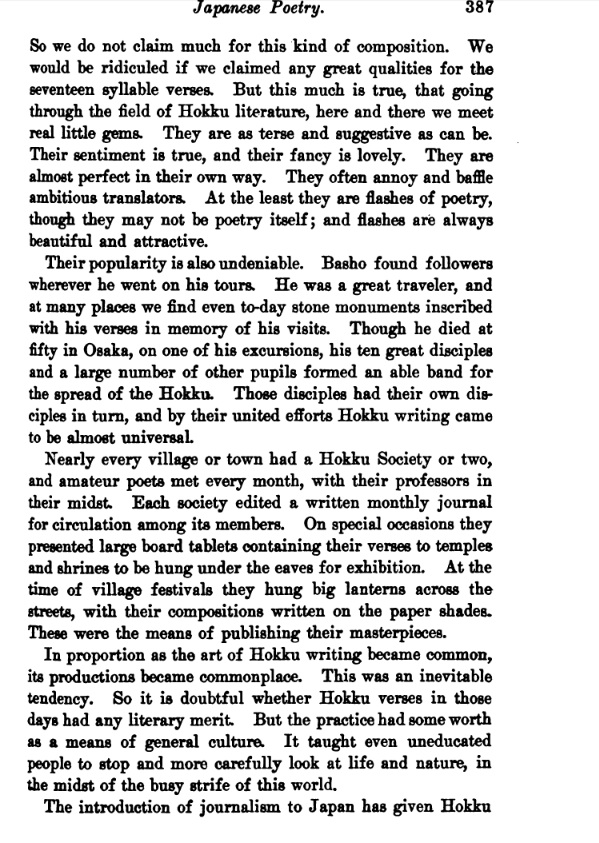 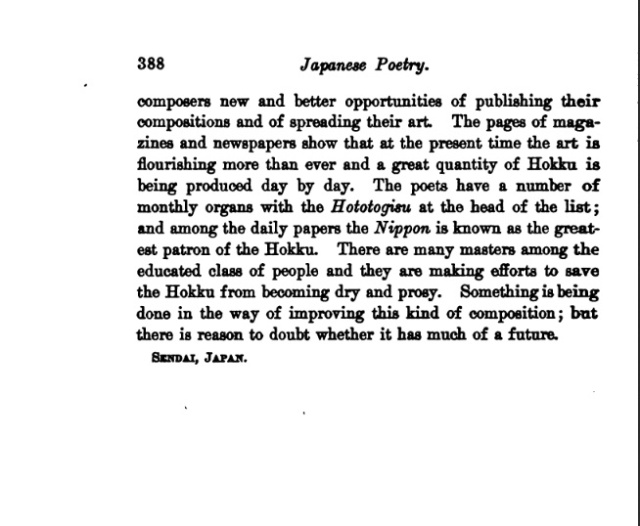 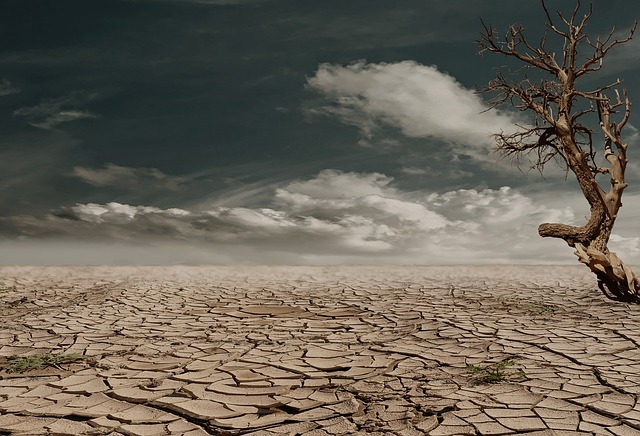 A line from the 1983 surreal Dutch movie  The 4th Man (De vierde man) has remained in my head over the years, and it comes to mind repeatedly now when I read or watch the daily news.  The line is this:

“When you are warned, you must listen.”

In the movie, the lead character keeps encountering ominous portents of something terrible to come.  And here are just a few samples from recent news:

“Three-quarters of flying insects in nature reserves across Germany have vanished in 25 years, with serious implications for all life on Earth, scientists say…”  https://www.theguardian.com/environment/2017/oct/18/warning-of-ecological-armageddon-after-dramatic-plunge-in-insect-numbers

“Only 60 Years of Farming Left If Soil Degradation Continues

Generating three centimeters of top soil takes 1,000 years, and if current rates of degradation continue all of the world’s top soil could be gone within 60 years, a senior UN official said…”  https://www.scientificamerican.com/article/only-60-years-of-farming-left-if-soil-degradation-continues/

“The world is facing a ‘biological annihilation’ of species, researchers warn

The world is experiencing a “biological annihilation” of its animal species because of humans’ effect on the Earth, a new study has found.Researchers mapped 27,600 species of birds, amphibians, mammals and reptiles — nearly half of known terrestrial vertebrate species — and concluded the planet’s sixth mass extinction even was much worse than previously thought.

They found the number of individual animals that once lived alongside humans had now fallen by as much as 50 per cent…”  http://www.independent.co.uk/environment/world-facing-annihilation-species-extinction-animal-population-proceedings-of-the-national-academy-a7834531.html

Our great misfortune at this time is to have a government — and not the only one — that does not listen.  My own view of the matter is that any world leader who refuses to listen to the countless daily warnings of impending ecological disaster should be legally removed from office for gross negligence of duty by endangering the country and the planet.

There are many factors contributing to why people do not listen.  Schools that do not teach students how to think critically and examine evidence.  Religions that prefer fundamentalistic self-deception to factual evidence.  The greed of corporations and individuals for lifestyles that require the rape and destruction of the environment.

Just consider one factor — the effects of people who insist on eating meat when a perfectly healthy (more healthy, in fact) diet can be had without it:

“Livestock farming has a vast environmental footprint. It contributes to land and water degradation, biodiversity loss, acid rain, coral reef degeneration and deforestation.  Nowhere is this impact more apparent than climate change – livestock farming  contributes 18% of human produced greenhouse gas emissions worldwide. This is more than all emissions from ships, planes, trucks, cars and all other transport put together.”  https://phys.org/news/2017-04-ways-meat-plate-planet.html

Perhaps you are wondering why I am talking about this on a site usually devoted to hokku and other forms of verse.  As I have mentioned before, hokku is a rather unique form of verse because it has as its subject matter Nature and the place of humans within and as a part of Nature, set in the context of the seasons.  That means it is critically connected to the environment.  And no one who pays attention to Nature and the seasons can fail to see the danger signs all around us every day now.   And as the line in The 4th Man cautions,
“When you are warned, you must listen.”

The autumn sun;
The chill when it goes
Behind a tree. 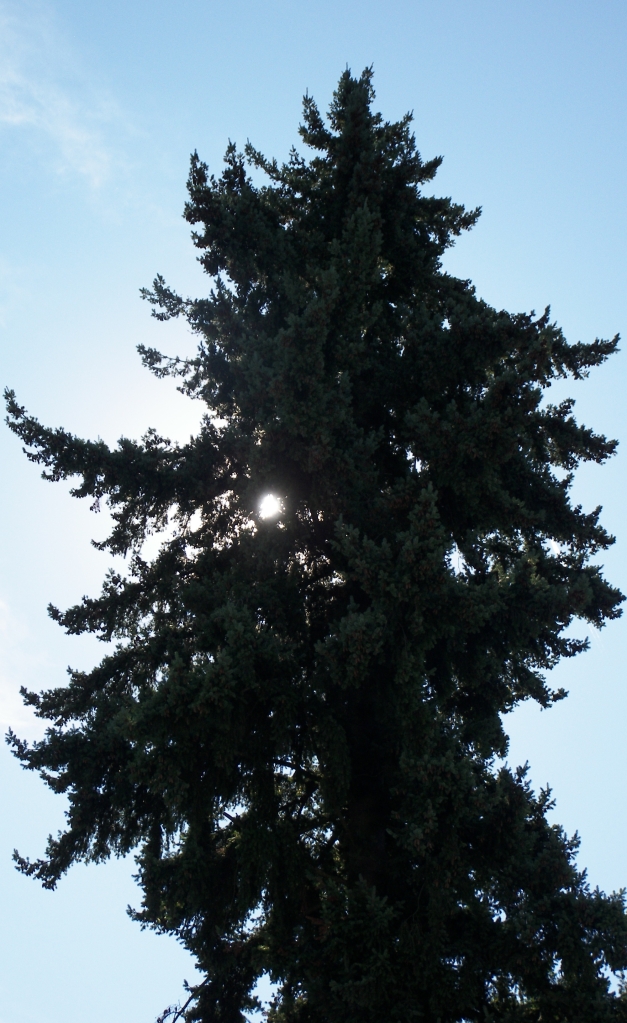 The sunlight of the shortening autumn days is so weak that in a shadow, the air is cold.  In that, we feel the weakening of the Yang active energy and the growing of the cold, inactive Yin energy of the waning year.