In less than a week, July ends and August begins.  In the Hokku Calendar, summer ends with the last day of July, and the first of August is Harvest Home, as it was commonly called, or in older speech, Lammas, and in Gaelic Lughnasadh (Loo-nuh-suh).  Harvest home is the beginning of autumn in the old calendar.

Harvest Home comes halfway between Midsummer’s Day and the Autumn Equinox.  It is so called because in old times it was when the harvest is “brought home” to barn and house.  Prominent in this harvest is the ripened grain, and that leads us to its second name, Lammas.

Lammas is a slurring of the words “Loaf Mass,” so called because that was when the first grain was brought in, ground to flour,  and a loaf baked from it and taken to church.  So we can think of it as the first baking of bread from the new harvest.

All of this connects us to the earth and to very ancient times, because this harvesting of the grain was ritualized as the annual death of the Spirit of the Grain.   Through spring and summer it grows and flourishes, dressed in green, and at summer’s end it matures and is cut down and partly ground to flour, but later the “body” is also placed in the earth at spring planting (as seed grain), so the Spirit is resurrected and dies each year.  In later folk tunes with liquor in mind, the Spirit is called “John Barleycorn.”

But the Spirit of Grain was generally seen as female, and stalks of grain would be woven into an ornamental shape kept indoors through the winter, called in some places a “corn dolly” — “corn” meaning grain in the British Isles.

There were many variations on this practice.  In one, the last tuft of grain was woven into a human form, decorated with ribbons, carried into the farmhouse, and seated in a chair of honor at the Harvest Supper.  Other regions had other customs relating to the “corn dolly,” and even other names and forms for it.

In any case, the “power” of the grain, its “spirit” was felt to be preserved over winter in the corn dolly  until the time of spring planting.

So Lammas, Harvest Home, is an old harvest festival that we would do well to bring back into celebration.  I am in favor of anything that reminds us that our lives depend on the earth and its produce, and that we should respect it.

The snail moves round
To the underside of the leaf;
The heat!

If you reach back in your memory to previous postings about the Hokku Calendar — the Hokku Year — you may recall that the actual effect of an astronomical event such as Midsummer’s Day (the Summer Solstice) is felt about a month later than the event itself.

We look on Midsummer’s Day as the time when the Yang energies reach their maximum and then begin to decline according to the position of the sun; but because the actual  effect is not felt until a month later, we do not immediately experience the manifestation of that event in our lives.

All of this is leading up to reminding you that July 22nd is nearing.  That is about a month after Midsummer’s Day, and what it means for us is that the Yang energy of summer — “fire” energy –will manifest at its highest point.

Because of this, it is traditionally believed that people should not exert themselves too much at that time, should not go on trips, and should not go outdoors in the middle of the day.  It has to do with the effects of this “extreme Yang” energy on the body.

This time even has its own name in the old Chinese and Japanese calendars:  it is called “Great Heat,” and it takes place approximately July 22-24th.

Of course that means we are closer to the traditional end of summer and the very old holiday of “Harvest Home” — Lammas, also called Lugnasadh (LOO-nuh-suh), which is usually celebrated on or close to August 1st.

There is a hokku by Buson that may easily be misunderstood.  R. H. Blyth presents it as

Not a leaf stirring:
How awesome

The problem is the word rendered as “awesome.” We might think it means “very pleasant” or something similar. But using “awesome” in that sense is very recent in English. Buson’s term osoroshiki, which has the underlying sense of “fear-inspiring” — is much like the older usage of “awesome,” which similarly included an undertone of fear and dread.

The vast grove of old trees, completely still and silent on a summer’s day, with not one leaf moving, was experienced as overwhelming and intimidating.

That may initially seem odd, but it makes sense to me because of an experience I had when I was a very young boy.

In those days, my best friend and I liked to go hiking and roaming all over the rural countryside.  One day we went beyond our usual territory, and came to the edge of an old forest.  In retrospect, it was likely the first untouched old-growth forest I had ever seen.

We left the sunny field that bordered it, and entered the wood.  At once everything changed.  We were surrounded by huge trees whose tops we could not see, and haphazardly lying among them were massive fallen and decaying logs.  Everything — ground and fallen trees — was covered in a thick layer of soft, green moss several inches deep, and the light of the wood about us was a shadowy green.

We had gone some distance into this ancient, silent and still wood when we stopped and looked all around.  Then suddenly, inexplicably, we were both seized with panic, and hurriedly turned and rushed out of the forest as quickly as we could, back into the sunlight.  We never returned there again.

If you had asked either of us what in that ancient wood had filled us with sudden dread, I doubt we could have answered.  It was only later that I learned our fear was nothing new, that the ancient Greeks had felt it too.

Their explanation was Pan, the god of forests and shepherds.  They said that if a wanderer were suddenly to stumble across Pan, the embodiment of everything wild and natural, the god would fill him with an immediate, irrational, overwhelming fear —panic — a word derived from the god’s name.  It seems my friend and I, coming upon that untouched primeval forest for the first time, were so struck by its sense of otherness — of tremendous wildness — that we too were overwhelmed with panic. 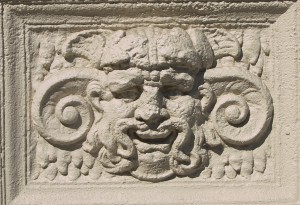 As for the hokku itself, I don’t think it works very well because it is so easy to misunderstand.  One would have to experience it, as I did, to “get” it.  So it does not make a good model for writing in English, and I include it here only because it helps to show both the difficulty in translating some hokku and the role experience plays in reading them.

I often emphasize the importance, in writing hokku, of seeing something in a new way.  It is not that we constantly have to look for quite new subjects; it is just that when we see an ordinary thing in a new way, we perceive it differently; we have what Blyth used to call a “little enlightenment.”  We suddenly realize that the experience is telling us something we already knew, but did not know that we knew, until it was shown to us in a different way.

The seasonal context of a thing changes it.  We experience the same thing differently in different seasons.  Here is a good example, a “little enlightenment” of Buson:

Ordinarily we think of such webs as light and airy, open to the wind.  But in the heat of summer, entering and walking through a dry and windless grove of trees, we feel spider webs sticking to our face and hands, and suddenly we realize 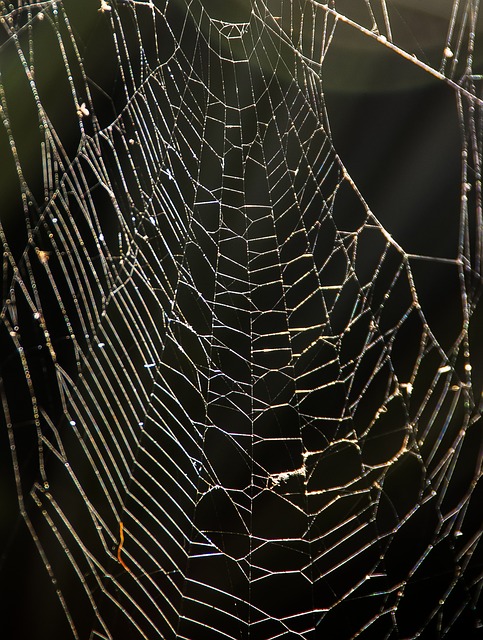 Like the verses in the two preceding postings, the bothersomeness of the spider webs on our skin in the windless grove only magnifies the heat.  One uncomfortable thing added to another uncomfortable thing makes both worse, with each bringing out the nature of the other.  And in doing so, they help to give the verse unity; the parts all work together as one experience, which in hokku is very good.

Suddenly realizing that spider webs are “hot things” is seeing something ordinary in a new way.  That is an opportunity we should use in writing.  Of course without the context of summer and heat, it would not be so.  In a different season and context, the nature of the spider webs — how we experience them — would also be different. 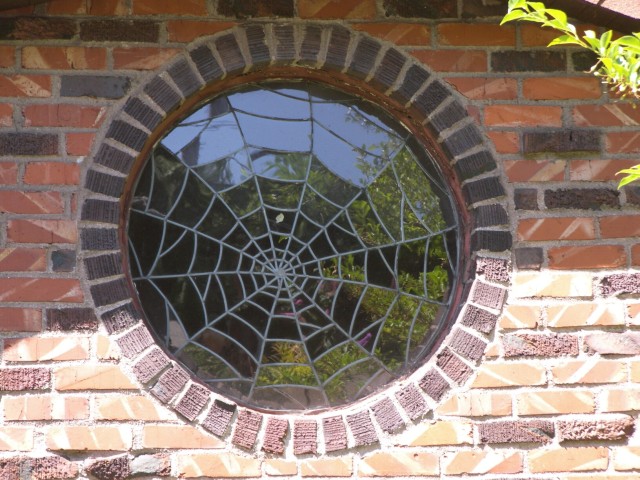 Here is a “westernized” variation on a hokku by Yayū that borders on senryu:

Hurriedly dressing
At a knock on the door;
The heat!

It is a very hot day, and the writer has been lying around nearly naked in the shadowy house interior, trying to cool off.  Suddenly there is a knock at the door, and he/she gets up with a start and hurriedly throws some clothes on, which, with the sudden activity of the body at the knock, make the heat of the day feel even more intense.

The unseasonably hot days continue here.  It brings to mind a hokku by Sono-jo, a female writer.

As you know, summer and winter are the two “extreme” seasons; summer for its heat, winter for its cold.  Consequently it is effective in hokku to put opposites together — a cool river on a hot day, a warm quilt on a freezing day.  That helps to bring out and express the nature of the cold of winter and the heat of summer.

There is another useful method, however, for expressing the nature of an extreme such as heat or cold.  That is by combining it with something similar in some way, so as to add emphasis.

Here is how Sono-jo did it (Blyth’s translation, which can hardly be bettered):

The child on my back
Playing with my hair —
The heat!

Not only is the day unbearably hot, but the heat is only magnified by the sweaty heat of the little body against her back, and the hot little fingers tangling and tugging her hair.

So it is the “bothersomeness” of the child carried on her back and playing with her hair, that magnifies and emphasizes the last line:

We feel the uncomfortableness of the heat in the uncomfortableness of having the little child on her back.  It is not that she does not like the child; it is just that in this case, at this particular time, the child has become a living manifestation of the heat and its troublesomeness.  If you are a regular reader here, you will recognize this as just another variation on the writing method known as “harmony of similarity.”

It is good to keep such correspondences in mind as possible techniques to use when writing hokku, as well as in reading them.