There is an old Italian saying that the translator is a traitor.  That can at times be true, if a translation is manipulative and unfaithful to the original, but in general it is not true.  A translation is not an effort to betray, but rather an effort to wipe the dirt from a window, so that we may see — even if sight is distorted by bubbles and flaws in the windowpane — from one language or culture into another.  The more different the patterns of thought in one language are from another, the more difficult it is to translate faithfully.

Today I would like to discuss a poem by Constantine Cavafy (1863-1933), who wrote in Greek but lived in Alexandria, in Egypt.  He is not a poet one finds in college anthologies generally, because first, he did not write in English, and second, many of his poems have to do with same-gender attraction and relationships, which is something only recently dealt with openly as our societal attitudes have become more tolerant and understanding.

A peculiarity of Cavafy is that he often writes the poetic equivalent of historical fiction; he puts himself into the minds and times of people long dead, often people who lived in the period and culture known as “hellenistic,” when — after the conquests of Alexander the Great — Greek culture and language and thought spread over a very wide area.

Cavafy’s verses deal also — either openly or by implication — with what I would call the “Christian Revolution,” — the rise of Christianity in the Mediterranean region with all the mixed good and evil that implies:  the joining of the new religion with the power and authority of the state, its astonishing intolerance of other ways of belief and thought, and how it caused the dying out of the pre-Christian world all around the Mediterranean Sea.

When we translate Cavafy into English, we get the meaning; but as is very common and unavoidable in translation, we lose the sound, and sound is a very great part of poetry.  So that loss is the distortion caused by the old and wavy glass in our window of view, but we should be glad that we can nonetheless see a good deal of Cavafy’s poem through translation, in spite of that.  The one I discuss today is called Ionikon;  that is sometimes translated simply as “Ionia,” or “To Ionia,” or “Song of Ionia.”  Ionia, in ancient times, was a Greek-speaking cultural region in the western part of what today is Turkey.

Here, first,  is Cavafy’s Ionikon in transliterated Greek, so that you may see the sound patterns we shall inevitably miss in English translation.  I have indicated accented syllables:

Because we smashed their images —
Because we cast them from their temples —
It does not mean the gods no longer live.
O land of Ionia, they love you still;
You enliven their souls still;
And when an August morn dawns upon you
Your atmosphere turns vibrant with the vigor of their lives;
And sometimes an etheric, youthful form,
Indefinite in moving swiftly by,
Will pass above the summits of your hills.

And what does this mean?  Well, it is rather a grander equivalent of “You can take the boy out of the country, but you can’t take the country out of the boy.”  Cavafy is saying that even though the people of Ionia have changed their faith — even though they have smashed the statues of the gods and have expelled the gods from their shrines –nonetheless the gods have not stopped loving the Ionian land; that sometimes, in the still of an August dawn, one may catch sight of an airy, youthful figure –indistinct and moving so swiftly as to almost be unseen — passing above the summits of the Ionian hills.

That figure, hazy and uncertain, is of course a god in youthful and immortal form — barely visible to the mortal eye, yet so full of divine energy the air is vibrant with his passing.  Cavafy does not identify the youthful passer-by, but it is likely the god Hermes, the swift messenger of the gods — Hermes, god of athletes and of herds, of roads and travelling, who is also the guide of the soul into the afterlife.  One of the forms he took — for the gods can change their forms at will — is that of a handsome, youthful athlete.

Ionikon is actually the final revision of an earlier poem that was titled first “Remembrance” or “Memory,” and later “Thessaly.”  The earlier version begins by telling the reader that the gods do not die; it is the beliefs of the mortal mob that die.  This was expressed in more refined and suggestive form in the final version, Ionikon.

Seen in its overall context, one has the feeling the poem was written by a fellow of rather noble spirit — still quite pre-Christian and “pagan” at heart — who has watched the fickleness of humans and their changes of allegiance, and who still prefers the old ways.  Cavafy himself seems to have been Greek Orthodox nominally and in general practice, but he had the ability to put himself completely into other minds in other times, and that is what he seems to be doing here.  The earlier, anonymous writer into whose mind Cavafy puts himself in Ionikon is saying that the attitudes of mere mortals — those lesser than gods — may change with time and fickleness, but the gods themselves are immortal and do not change, nor are they dependent upon human constancy of faith; the gods have their own lives and affairs that continue on a much greater time scale than the human.

In spite of the frequent sensuality one finds in many of Cavafy’s other poems, underlying them all is a sense of time and transience and loss.  His fondness for writing himself into far earlier times and minds only adds to that sense of constant change, and of our final inability as mortal, aging humans to hold on to anything, no matter how much desired or loved.  It is this profound sense of transience that the poems of Cavafy share with hokku, no matter how dissimilar the two kinds of verse are in other ways.

Cavafy’s odd ability to think himself into another time and person is one of the chief characteristics of his work, and his facility in so doing makes his “historical” poems seem very real.

Here is the poem Ionikon in its original Greek, for those who may wish to see it:

The very best site on the Internet at present for those who wish to read more of Cavafy is the Official Web Site of the Cavafy Archive.  You will find it in both Greek and English: 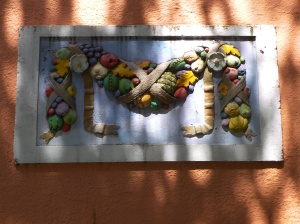