In traditional hokku, dew was a subject for autumn.  The female writer Chiyo-ni wrote:

Spilt,
It is only water;
Safflower dew.

It looks one way when on the colorful safflower blossom with its “cosmetic” reputation, but when it spills from it, it goes back to being simply water.

I have noticed that a number of Internet sites seem confused about this verse — or rather about the flower involved.  When Blyth translated it, he did so as “rouge-flower,” and indeed that is technically correct.  In Japan the safflower has been used for centuries to make a red cosmetic.  But the word “rouge” has misled various people into thinking that it must be dew on a deep-red blossom, and that is not the case.  The safflower, in its natural state, is actually more yellow than red, though one may see ruddy hints near the base of the petals.  Through a special process, its 1% of red coloring is concentrated and made usable.

Because we in the West know the plant more through its use in cooking oil, we are likely to let that color the impression the verse makes on us, whereas in Japan the beni flower — benibana or beni no hana — has centuries of association with red dye and cosmetics valued by the upper classes. 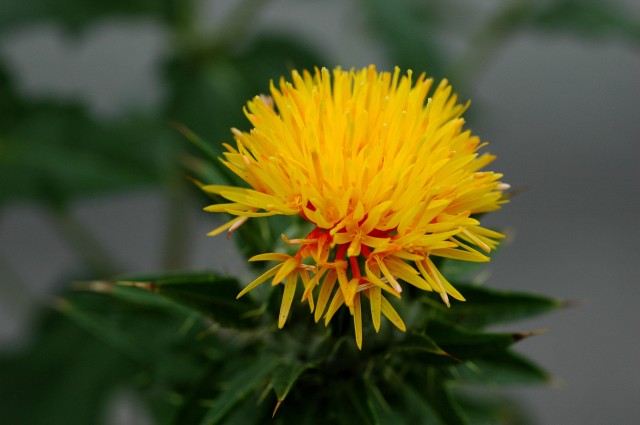 Chiyo-ni’s verse is reminiscent of a verse from another season by Aon:

When night ends,
It becomes an insect —
The  firefly.

The essence of these verses is change.  In one circumstance the dew and the firely are one thing, but in another circumstance they are another, neither being better nor worse than the other.

Blyth emphasizes that from a “Zen” perspective, that is how to understand them.  One could read them as:

When it is spilled,
It becomes just plain water;
The dew on the safflower.

When night ends,
It becomes just an insect —
The firefly.

But the correct perspective — Blyth tells us — is to see things equally, whether the dew is on the safflower or off, whether the firefly is glowing by night or dull by day.

Was that the perspective of Chiyo-ni and Aon?  Perhaps not.