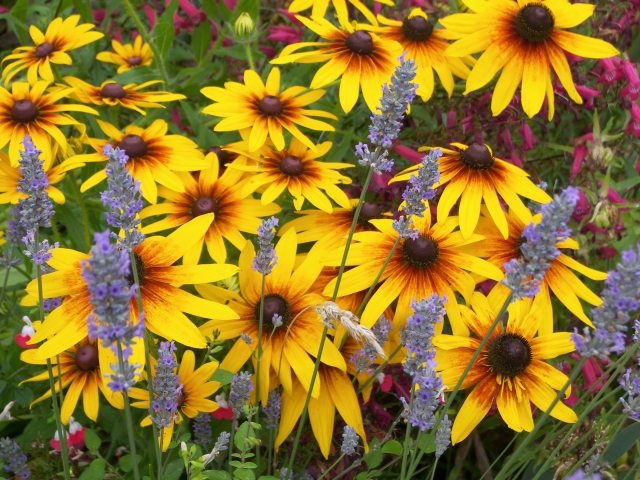 Today’s poem — by American poet Elinor Wylie (1885-1928) — is one I find simultaneously both interesting on a sensory level and very troubling.  I think you will see why.  It depicts the heat of August through the image of a man of African ancestry wheeling a barrowful of (presumably) “Black-eyed Susan” flowers — also called Gloriosa daisies (Rudbeckia hirta) –down the hot August street.

In the imagery of this poem, Wylie creates very obviously what Rachel Blau DuPlessis calls — in her essay titled “Racialized Cultural Work” (Reading Race in American Poetry: An Area of Act: University of Illinois Press, 2000) — a “black-white binary” — in short, a presentation of presumed opposites.  There can be great danger in this when applied to humans of different appearance.

Here is Wylie’s poem, which, following its imagery, we shall take in two parts:

Why should this Negro insolently stride
Down the red noonday on such noiseless feet?
Piled in his barrow, tawnier than wheat,
Lie heaps of smouldering daisies, sombre-eyed,
Their copper petals shriveled up with pride,
Hot with a superfluity of heat,
Like a great brazier borne along the street
By captive leopards, black and burning pied.

Wylie expresses displeasure with the heat through her image of the dark man pushing the “smouldering” barrow of flowers — both symbolizing the intensity of  August — down a street in the noonday sun.  She begins, “Why should this Negro insolently stride ….”

Now that phrasing raises clanging alarm bells in my head immediately, because it recalls the standard deprecating racist term used in the past to describe American men (and women) of African ancestry who behaved with self-confident assurance: “uppity.”  Not only that, but old news articles from racist times and locales in America actually had headlines using the very phrase “insolent negro.” Her use of that racist phrase is only magnified by her description of the daisies as “shriveled up with pride.”

So Wylie uses the imagery of the dark-skinned man silently wheeling the barrow full of tawny (orange-brown) daisies down the street to signify the oppressive heat of summer — a heat smouldering and excessive.  Then she takes the image to a greater level of fantasy by comparing the barrow of “smouldering” coppery-petaled flowers to a brazier (a metal container of burning coals) carried along the street by captive leopards that are two-colored (pied) — both black and “burning” (the black spots over the lighter orange-brown of a leopard’s fur, like the gold-brown of Gloriosa daisies).

Having shown us the August heat through this imagery, Wylie expresses her dismay that there is no ready alternative to it:

Are there no water-lilies, smooth as cream,
With long stems dripping crystal? Are there none
Like those white lilies, luminous and cool,
Plucked from some hemlock-darkened northern stream
By fair-haired swimmers, diving where the sun
Scarce warms the surface of the deepest pool?

She asks, in the presence of the “heat” imagery, is there not something cool and refreshing — no water lilies with long stems dripping crystal drops of water — no lilies like those picked in some northern stream shadowed by hemlock trees, white lilies that are luminous and cool?  And to add to the contrast, she sees these lilies as “Plucked — by fair-haired [blond] swimmers” who dive into water where the sun hardly warms even “the surface of the deepest pool.”

Now it is not hard to see that this is a black-white, hot-cool contrast, or as Rachel Blau DuPlessis put it, “a black-white binary.”  The hazard in this is depicting the “black” side as “insolent” oppressive heat, and the “white” side as cool and refreshing — with the danger that a reader may expand these images into opposite racist stereotypes of society in general.

Now if this poem had not been written under the racist overtones of its time, we could simply take the imagery for what it is — a contrast of bothersome heat and refreshing coolness — without expanding those images into harmful and greatly misleading racial stereotypes.  As such, the imagery would be interesting.  But it is very difficult to read this poem simply as such, without the taint of the racist past of the United States interfering with the colorful and effective imagery.  It is very hard to get past that first line without wincing, as we look back on all the devastating troubles that thoughtless use of words has caused Americans of African descent.

2 thoughts on “THE TAINT OF THE PAST: ELINOR WYLIE’S “AUGUST””