This morning I was reading through old summer poems in English — a rather disappointing experience, because most are so heavy-laden with personification that they fail to adequately express the season.  It is refreshing to turn from them to the clarity and directness of hokku that present the experience of summer to us directly.

Nonetheless, here and there one finds works of Western poetry that “stick to the subject,” without a burdensome overlay of of personification and metaphor — among them, John Clare’s pleasant “Sonnet.”  Its only ornamentation lies in the subjective use of “I love,” and “I like,” and in the use of simile:

It expresses Clare’s joy in seeing the shining light of summer.  The scene he depicts seems to be set near the beginning of summer, which you will recall begins in May in the old calendar.

He speaks of white clouds floating in the blue sky as “white wool sack clouds sailing to the north” — reminiscent of the later words of Gerard Manley Hopkins in his poem “Hurrahing in Harvest”:

what lovely behaviour /Of silk-sack clouds!

Only Clare — being more rustic — likens to wool rather than silk.

He then turns his eyes from sky to earth:

He joys in the warm-weather return of wild flowers, and looks to where golden flowers fill the ditch that drains water from the meadow.  They are “mare blobs” in common speech — Caltha palustris — the marsh marigold.

Clare tells us that

By “floods” he means here simply “waters” (rivers, ponds, lakes); and on them the water lilies grow white.  Here is Nymphaea alba, the white water lily native to Britain: 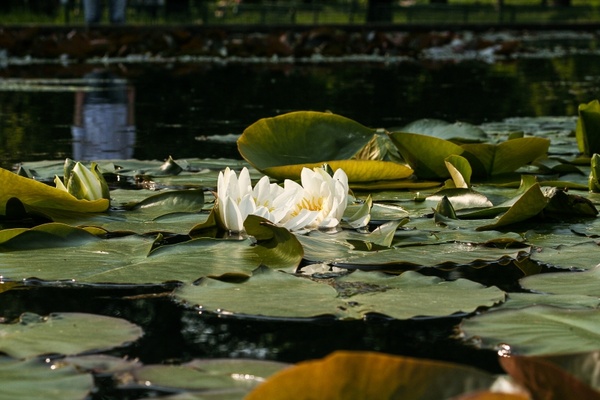 There, where the water lilies bloom, the clumps of tall reeds rustle “like a wind shook wood” — that is, like trees shaken by the wind.

The moor hen — Gallinula chloropus — pushes out of her hiding place among the reeds. 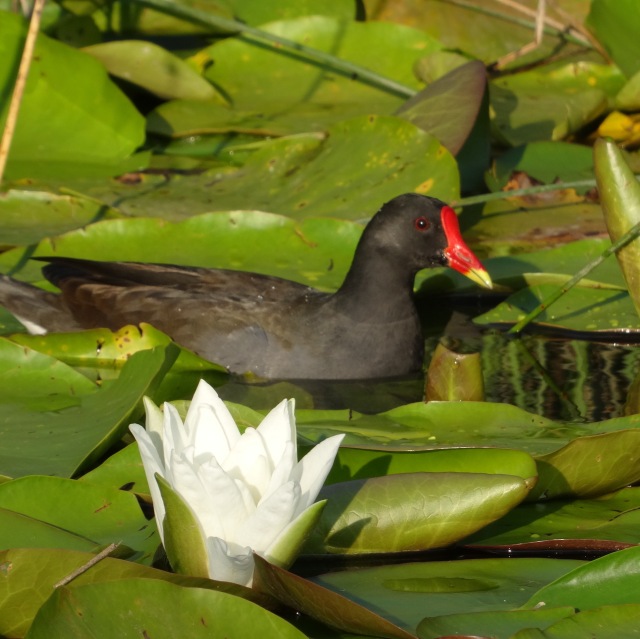 The nest the moor hen seeks is a “flag nest” that is, a nest made of the leaves of the common water flag, Iris pseudacorus: 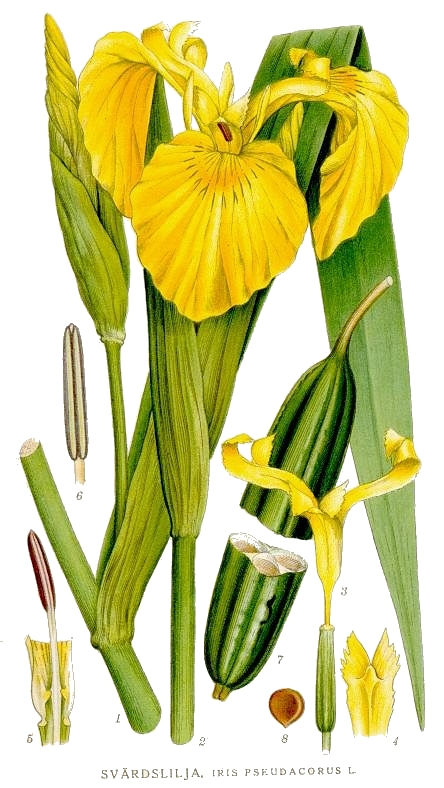 The yellow water flag is also known as the “gladden,” which accounts for the “Gladden Fields”  the  marshlands where Isildur was slain in Tolkien’s The Lord of the Rings, and where the “One Ring” was lost in the river.

the willow leaning half way o’er
The clear deep lake to stand upon its shore.

“Hay grass” is the grass left to grow tall and luxuriant so that it may be cut with the scythe and stored in the barns as hay for beasts.  Clare likes to see the blossoms of wild flowers as they move to and fro in the tall grasses in the summer wind, and the insects flitting about in the sunshine.

And see bright beetles in the clear lake play

His gaze is drawn to the water beetles scuttling about in the bright water.

John Clare (1793-1864) was an English poet born of poor and illiterate country workers, and though he managed to get some of his work published and received a small annuity, it was never enough to support his family, so he also had to work as a farm laborer.  The many difficulties of life eventually became too much for him, and he began to have mental problems and delusions that caused him to be placed in an asylum.

We do not know why this poem by Clare is not punctuated.  It is known only from a copy transcribed by W. F. Knight, the steward at the asylum where John Clare spent over two decades of the latter part of his life.

One thought on “THE SUMMER BEAMING FORTH: JOHN CLARE’S “SONNET””