In much of Western poetry, an event is used simply as a lead-in to talking about another subject somehow related to the first. An example is this poem by Walter Savage Landor (1775-1864): 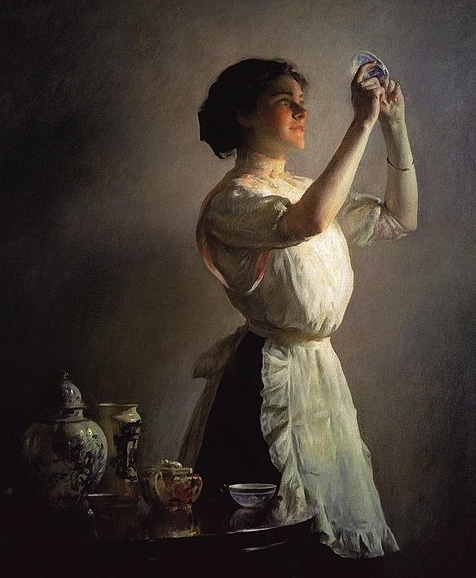 My pictures blacken in their frames
As night comes on,
And youthful maids and wrinkled dames
Are all now one.

Death of the day! a sterner Death
Did worse before;
The fairest form, the sweetest breath,
Away he bore.

Landor has begun with the light of day departing from a room in which paintings hang, and in them are women both young and old. But as the light fades, the pictures all turn gradually black as night falls. All of this, however, is just an introduction to his real subject:

Landor calls the end of day the “death” of the day. And he immediately moves on to his main subject by saying that a sterner, a more real and harsh death than that of day was when Death took away a beautiful person that he obviously loved, someone beautiful in form and face. By “sweetest breath” he does not mean only that this beautiful person had a fresh and inoffensive breath. In biblical usage (and Western poets were once heavily influenced by the Bible, which in translation was considered the primary book of English literature), when the breath departs the life departs, so Landor is using “breath” to mean that the sweetest life is gone, the life of the beloved one.

“Away he bore” is of course a personification of Death as a dark, male figure; Death carried away the life of the beloved one.

In the previous posting, a variation on a hokku by Buson, we also had an “ending event” — a spring evening. And if you are a regular reader here, you will recall that evening, which is the end of day, also corresponds to the waning of the Yang energies that cause all the growth and life in spring and summer. So early evening corresponds to autumn. It does not symbolize autumn, it just has that feeling of being the same in some way. That is why when we talk about an evening in autumn, we are using harmony of similarity. When we talk about an evening in spring, however, we are using harmony of contrast, because evening is a time of ending, but spring is a time of beginning.

Landor obviously felt the same similarity — end of day, end of life (Death). But the big difference is that Landor comes right out and says it: “Death of the day,” which of course hokku does not, because hokku is much more subtle, more filled with unspoken implications, and that is a great part of the beauty of hokku. In hokku it is more important to FEEL such connections and rather too crude and blunt to actually SAY them.

I remember my Chinese teacher, who was brought up in the old way, telling us that in the China of her day, people would not say “I love you” to another. That was considered vulgar and brash, because saying something is easy; the far more meaningful way is to show someone that you love them through your actions toward them, how you treat them. That is very much the attitude of hokku. It is far more meaningful, more fitting the hokku aesthetic, to imply something while leaving it unspoken. “Show me, don’t tell me.”

So what would a hokku writer do with the event Landor experienced, but used as his introduction to talking about the death of his beloved? The writer of hokku would reduce it to the brevity of hokku, and would use only the event itself, an event filled with unspoken implications.

We could make it an autumn verse, if we wanted harmony of similarity, like this:

Day darkens;
All the paintings on the wall
Become the same.

We often find verses or lines in Western poetry that by themselves have something of the spirit of hokku, but generally, as I first mentioned and as we see in Landor’s poem, they are only the lead-in to, the excuse or inspiration for, talking about something else. But in hokku it is the EVENT ONLY that we want, because such events in a season, in a life, are filled with unspoken meaning. That is why we say of hokku that it is “much in little.”

The hokku variation on Landor’s “event” would require someone to be very quiet and aware to experience and think worthy of notice something as simple as the light fading in a room and the paintings gradually losing their colors and images with the coming of night. One has the sense of someone sitting there alone in the dim silence as the minutes slowly pass and everything blackens all around, someone who, for reasons unknown, does not rise to turn on a light (or light a candle in earlier times), but just continues sitting there in solitude, gradually enveloped by the night.