Today’s poem, the fourth in Alfred Edward Housman’s A Shropshire Lad, is titled Reveille. The word, of French origin, is used in the military to mean the bugle call that wakes the soldiers. But here it is used in a more general sense to mean just a morning call to awakening and to action.

Wake: the silver dusk returning
Up the beach of darkness brims,
And the ship of sunrise burning
Strands upon the eastern rims.

Housman begins with a cry to awake. He uses “dusk” in an uncommon way here. He means that the silvery half-light one sees at the end of day after the sun has set has come again as the half-light preceding the rising of the sun. So the “silver dusk returning” is the return of the dusky, whitish pre-dawn light of morning, and it rises against the darkness of night (“the beach of darkness”) like a silver tide rising up a shore. Then “the ship of sunrise,” meaning the brilliant fiery light of the rising sun, appears above the eastern horizon, the “eastern rims”; Housman compares this to a fiery ship stranded upon the horizon.

Wake: the vaulted shadow shatters,
Trampled to the floor it spanned,
And the tent of night in tatters
Straws the sky-pavilioned land.

Again comes the call to awake. The “vaulted shadow” is the dark night sky, like a black vaulted dome over the earth; but now that the sun is rising, it “shatters,” it disappears. Housman says it is “trampled to the floor it spanned,”; as the darkness vanishes from the sky, it remains only on the “floor” that is, upon the earth below. That is explained by the next two lines:

And the tent of night in tatters
Straws the sky-pavilioned land.

The “tent of night” is another way of repeating the “vaulted shadow,” the dark night sky. Here it is likened to a tent covering the world, but now it falls in tatters, in fragments, strewn over the “sky-pavilioned” land. By “sky-pavilioned,” Housman is referring to the “tent” of the sky, which stood over the earth like a light tent pavilion, but now its tatters are spread over the earth in shadows that remain briefly as the sun rises in the East. “Straws,” here, is an old form meaning the same as the verb “strews,” that is, “spreads out or scatters.” So shadows — the tattered remains of the fallen “tent of night” are scattered about here and there over the land.

And now comes a variant of the call to awake:

Up, lad, up, ’tis late for lying:
Hear the drums of morning play;
Hark, the empty highways crying
“Who’ll beyond the hills away?”

“Get up! Get up!” the poem is saying. “It is too late to stay in bed!” “Hear the drums of morning play” continues the military metaphor begun with the Reveille title; reveille used to be beaten on drums rather than played on a bugle; but here it means listen to the call to activity of the morning. “Hark” — listen with attention — to the open morning main roads calling to young lads, “Who wants to go away beyond the hills?” “Highways” in Housman’s time were the main roads for travel, not the huge, paved routes of today. So the poet is saying, “Wake up! the morning has come, the open road is calling, who will go wandering and adventuring?”

This is the perpetual call to youth. Youth is the time for traveling and exploring. It was in the late 1890s that the Wandervogel movement became popular in Germany. A Wandervogel is a wandering bird, and that’s what the youths of that movement were called, because they felt and followed the urge to travel and explore, to be free and out in Nature, and so went hiking up and down the Rhine river and here and there in Europe. When I was young, I used to feel the same call to travel every spring.

Towns and countries woo together,
Forelands beacon, belfries call;
Never lad that trod on leather
Lived to feast his heart with all.

Far towns and regions call to youth the way a lover invites, promontories shine like inviting beacons, bell towers scattered across the land call youth to adventure as well. And it never happened that any young man who “trod on leather,” (wore shoes) lived long enough to satisfy his heart with all the possible adventures and exploring that the world offers.

Up, lad: thews that lie and cumber
Sunlit pallets never thrive;
Morns abed and daylight slumber
Were not meant for man alive.

“Get up, boy!” Muscles (thews) that lie upon and burden (cumber) beds lit by the risen sun never thrive; people who lie in bed late never get anywhere; mornings spent in bed and sleeping during daylight were not meant for fellows with life in them.

Then comes the last and most memorable stanza of the poem, memorable because of its rhythm and its message packed into so few and simple words:

Clay lies still, but blood’s a rover;
Breath’s a ware that will not keep.
Up, lad: when the journey’s over
There’ll be time enough to sleep.

Note the rhythm of it:

“Clay” was once an often-used biblical metaphor for the human body, because humans were said in the Genesis myth to have been formed of “earth” and would return to it at death. Here Housman is saying that clay — the body– by itself lies still; but the blood that courses through the veins is a rover. Blood was often seen as the active element in human life, the element of movement and enthusiasm. We have often heard people say things like “Hiking is in my blood.” So Housman is saying that humans naturally have a roving urge within them. And breath, he tells us — that is, the breath of life, life itself — is a ware that, like certain things one buys in the weekday markets, “will not keep,” it will not last. Life is short. So get up, lad, and be doing! Don’t waste your youth, because when the journey of life has ended, when you die, when clay returns to earth, there will be time enough to “sleep.”

In short, the poem is a call to adventure for young lads, a counsel not to waste one’s youth. It is a call that many have heeded, and many others, all too late, wish they had. My youthful adventure was to buy a backpack, a cheap airplane ticket to England, and then to wander here and there all the way from Wales to Switzerland. I have never regretted it. I doubt one could do it the same today, so much has changed. But one can always go hiking and exploring, and youth is the time for that, as Housman says. 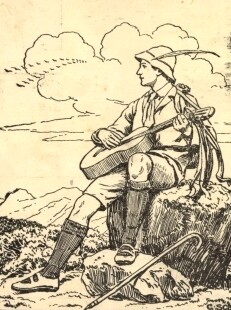 Housman’s Reveille is very much in the spirit of an old German song I used to sing in my teens when the spring wanderlust would strike me. Here it is with a very loose translation, so you may see the similarity of spirit to Housman’s poem:

May has come; the trees leaf out,
Who will may stay sadly at home;
Like the clouds that wander in the sky
My thoughts are out in the wide, wide world.

Get up, then, get up into the bright sunlight,
Right over the mountains, right through the deep valley.
The springs murmur, the trees all rustle,
My heart is like a lark and sings along.

O wandering, O wandering, you free joy of youth!
There God’s breath is so fresh in the breast,
There my heart sings and rejoices to the skies:
How beautiful you are, you wide, wide world!

Wake: the silver dusk returning
Up the beach of darkness brims,
And the ship of sunrise burning
Strands upon the eastern rims.

Wake: the vaulted shadow shatters,
Trampled to the floor it spanned,
And the tent of night in tatters
Straws the sky-pavilioned land.

Up, lad, up, ’tis late for lying:
Hear the drums of morning play;
Hark, the empty highways crying
“Who’ll beyond the hills away?”

Towns and countries woo together,
Forelands beacon, belfries call;
Never lad that trod on leather
Lived to feast his heart with all.

Up, lad: thews that lie and cumber
Sunlit pallets never thrive;
Morns abed and daylight slumber
Were not meant for man alive.

Clay lies still, but blood’s a rover;
Breath’s a ware that will not keep.
Up, lad: when the journey’s over
There’ll be time enough to sleep.